Letters from King Fredrick and Salahuddin 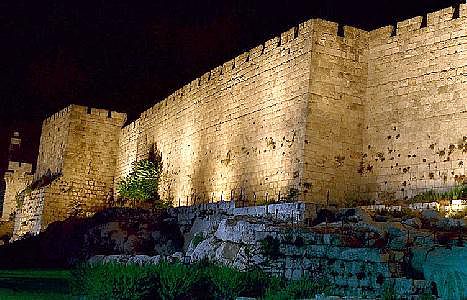 Below are two letters: One from King Frederick threatening a man named Salahuddin. The second is Salahuddin's response (As a point of information, Salahuddin's real name was Yusuf. He took the name Salahuddin as he rose to power. It meant 'rectifyer of faith' or something very close to that). These are accurate. I decided to post them in light of all the JEs I've come across with really irrelevant or inaccurate information regarding the time period. I thought some substance was in order.

I have a keen interest in medieval history. No I don't wear armor, capes, or pointy hats like those weirdos on all of our college campuses. I simply read a great deal about medieval Islamic history. I came across a series of correspondences between the kings of Europe and Salahuddin Ayyubi from this era. Below is the first of many exchanges. King Frederick had heard that a new leader named Salahuddin had arisen amongst the Saracens (Muslims), and was making his way to Jerusalem. He warns Salahuddin not to proceed in this letter. By the time the letter reached Salahuddin's camp, Salahuddin had already been chillaxin' in Jerusalem for three months.

As an academic footnote, pay attention to the change in language from the western letter to the eastern response. Most notably, the letter from the west is in first person while the response from the east is in third person. It is as if Salahuddin Ayyubi sat with his counsel and wrote a response together. I must remind you that the letter from Salahuddin's camp was translated from its original script. Also note the barb about the "true Joseph" by King Frederick. They knew that Salahuddin was born Yussuf, Joseph in the west. I have other serious thoughts regarding these missives, but this is already too long.

I love how King Frederick invokes the 'anger of the Teutons' in his threat. Poor Fred. Even better is Salahuddin's 'bring it on' attitude. It courses with vigor. I feel most sorry for the messenger who delivers the letter from the west, Henry. Boy, I wonder what was going through his mind when he was approaching Salahuddin's camp only to learn that his master's letter was a bit too late.

FREDERICK I BARBAROSSA TO SALADIN, KING OF EGYPT (written before the fall of Jerusalem was known in the west):

Frederick By The Grace Of God Emperor of the Romans, the ever august and glorious victor over the enemies of the Empire and the fortunate ruler of the entire kingdom, to Saladin, the illustrious Governor of the Saracens. May he take warning from Pharaoh and touch not Jerusalem!

?ou have profaned the Holy Land over which we, by the authority of the Eternal King, bear rule, as guardian of Judaea, Samaria and Palestine, solicitude for our imperial office admonishes us to proceed with due rigour against such presumptuous and criminal audacity. Wherefore, unless, before all things, you restore the land which you have seized,? a period of twelve months,?you will experience the fortune of war, in the field of Zoan, by the virtue of the life-giving Cross and in the name of the true Joseph.

We can scarcely believe that you are ignorant of that which all antiquity and the writings of the ancients testify?That?innumerable?countries have been subject to our sway?

All this is well known to those kings in whose blood the Roman sword has so often steeped: and you, God willing, shall learn by experience the might of our victorious eagles, and be made acquainted with our troops of many nations. You will learn the anger of the Teutons who take up arms even in a time of peace. You will know the inhabitants of the Rhineland and the youth of Istria, who never flee from battle, the towering Bavarians, the proud and cunning Suabians, the cautious Franconians, the Saxons who sport with their swords, Thuringians, Westphalians, the energetic men of Brabant and the men of Lorraine who are unaccustomed to peace, the fiery Burgundians, the nimble mountain men of the Alps, the Frisians with their javelins, the Bohemians who know how to die joyfully, the Poles fiercer than the beasts of the forest, the Austrians, the Istrians, the Illyrians, the Tuscans, the Venetians and the Pisans?and lastly, also, you will assuredly be taught how our own right hand, wich you suppose to be enfeebled by old age, can still wield the sword on that day of reverence and gladness which has been appointed for the triumph of Christ's cause.

EXCERPTS FROM A LETTER FROM SALADIN TO FREDERICK I BARBAROSSA, (replying after the fall of Jerusalem):

To The Great King, His Sincere Friend, the illustrious Frederick, King of Germany, in the name of God the merciful, by the grace of the one God, the powerful, the almighty, the victorious, the everlasting of whose Kingdom there is no end?

We make it known to the sincere and powerful King, our great and amicable friend, the King of Germany, that a certain man called Henry came to us professing to be your envoy, and he gave us a letter which he said was from your hand. We caused the letter to be read, and we heard him speak by word of mouth, and by the words which he spoke by word of mouth, we answered also in words. Here, therefore, is the answer to your letter:

You enumerate all those who are leagued with you against us, you name them and say ? the king of this land and the king of that land ? this count and that count, and the archbishops, marquises and knights. But we wished to enumerate those who are in our service and who listen to our commands and obey our words and would fight for us, this is a list which could not be reduced to writing. If you reckon up the names of the Christians, the Saracens are more numerous than the Christians. If the sea lies between us and those whom you call Christians, then no sea separates the Sarcens who cannot be numbered: between us and those who will come to aid us there is no impediment. The Bedouin are with us, and they alone would be sufficient to oppose all our enemies. And the Turkmans alone could also destroy them, and our peasants at our orders would fight bravely against any nations that invaded us and despoil them of their riches and exterminate them. And then we have the soldiers who opened up the land and took possession of it, and drove out our enemies. These together with all the kings of Islam will not be slow when we summon them, nor will they delay when we call them.

Whenever your armies are assembled, as you say in your letter, and whenever you lead them, as your messenger tells us, we will meet you in the power of God. We will not be satisfied with the land on the seacoast, but we will cross over with God's good pleasure and take from you all your lands in the strength of the Lord. For if you come, you will come with all your forces and will be present with all your people, and we know that there will be none remaining at home to defend themselves or fight for their country. And when the Lord, by his power, shall have given us victory over you, nothing will remain for us to do but freely to take your lands by His power and with his good pleasure.

By the virtue and power of God we have taken possession of Jerusalem and its territories; and of the three cities that still remain in the hands of Christians: Tyre, Tripoli, and Antioch, nothing remains but that we shall occupy them also. But if you desire war, we shall meet you with the power of God, who wills of his good pleasure that we shall occupy the whole land of the Christians. If you want peace, you have only to command the captains of these three cities to deliver them up to us, and we shall have restore to you the Holy Cross, and we shall liberate the Christian captives in all our territory, and we will be at peace with you. We will allow you one priest at the Holy Sepulchre and we will restore the abbeys to their former state and we will do good to them. We will permit the pilgrims to come throughout our lifetime and we will be at peace with you.

If the letter that came to us by the hand of Henry is indeed the letter of a king, we have written this letter in reply and may God give us council according to His will. This letter is written in the year coming of the Prophet Muhammad 584, by the grace of the only God. And may God save our Prophet Muhammad, granting the salvation of our saviour, our illustrious lord and victorious king, the giver of unity, the true word, the adorner of the standard of truth, the corrector of the world and the law?from the Sultan of the Saracens and the infidels, the servant of the two holy houses and the holy house of Jerusalem, father of Victories, YUSUF son of AYYUB.

Afaq (January 19, 2006 at 6:56am)
thank you guys for reading, I love the letters myself, they are the first peice of writing that Ive come across that enables you to really get an image of the mind of the great Salahuddin. And i am not dissapointed at all.

Hope you guys enjoyed them as much as me.

SitStill (January 6, 2006 at 2:54pm)
Interesting...too bad there weren't lawyers around to settle their dispute back in the day.