The impact of beard and hijab 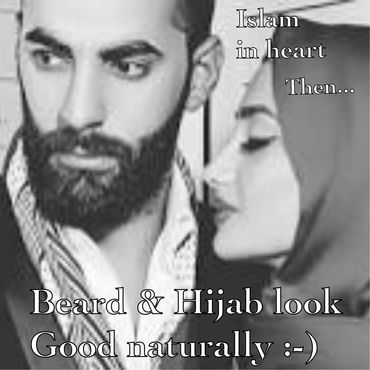 Since the age of twenty and perhaps before that , I never understood the power of the beard and hijab, until someone I knew of a foul character grew a beard , I saw this person in a very long time yesterday, and that person who has grown a beard just doesn't know how terrible it looks on that person. It not the face , it's actually the character. I have noticed the same with women covering their head or wearing a hijab, if despite wearing a hijab or covering the head still the woman does not look innocent there is something seriously wrong with her character .

It's true the beard and the hijab blend in with the face , I have seen several scholars , I am am talking of famous scholar whom I don't wish to mention, don't seem to look good in a beard, the fact of the matter is the beard doesn't bring a noor , or an element of goodness to that face. Women who don't truly believe in Allah, back bite, quarrel, create mischief, commit zina, attract attention from the opposite gender , wear heavy make up will not be able to achieve a noor on the face.

A false hijab/beard with no good inner intent, or part time hijab ultimately reflect the negative , the face of false person begins to look better without the hijab or beard, because the inner intent of clearing the heart, nature or soul is not present. If there is a man who looks better without a beard, or a woman who looks much better in features ( I am not talking about appealing to opposite gender , but appealing in nature ) without a hijab then I consider this to be a curse on the individual. It's a curse to not be able to look better with the beard or a hijab. Looking better in a beard or a hijab is a blessing, rather these two symbols of following Islam is given by the creator, if religion is truly followed by inner intent, then those around such a person could sense the blessing on such an individual.
The beard has such an amazing impact that If falsely kept then Allah takes away the signs of goodness from the face of any fraudulent person. I would advise that if any man wishes to marry a woman , he must see her at least once with her head covered , and if your a woman, then edit the face of the man, using photo shop, of perhaps a false beard, if the person's face does not reflect any signs of innocence or goodness it means that the person doesn't have much goodness within. The two symbols of islam the hijab and beard some how work as tool of inner reflection.
Marry those with Allah 's blessing not those that live with the creators curse.